Facebook Will Turn Your Panorama Photos Into 360-Degree VR Images

Snapping a panoramic photo seems like a good idea at the time, but what do you do with it? Facebook Inc. wants to give you an outlet to share the dozens of super-wide photos lying ignored in your phone’s camera roll. And with the same tool, you can get into the new world of 360-degree photography, too.
Facebook said, in a blog post from its Oculus virtual-reality division, that “in the coming weeks,” its users will be able to turn their panoramas into 360-degree photos and upload 360-degree photos made with dedicated 360-degree cameras.
Once you upload an image, your friends will be able to pan around the picture by tilting their phones, or by dragging their finger or cursor around the photo.
These 360-degree photos will be viewable in Facebook’s mobile apps, its website and both the Oculus Rift and Samsung Gear VR virtual reality headsets (through an Oculus 360 Photos app). 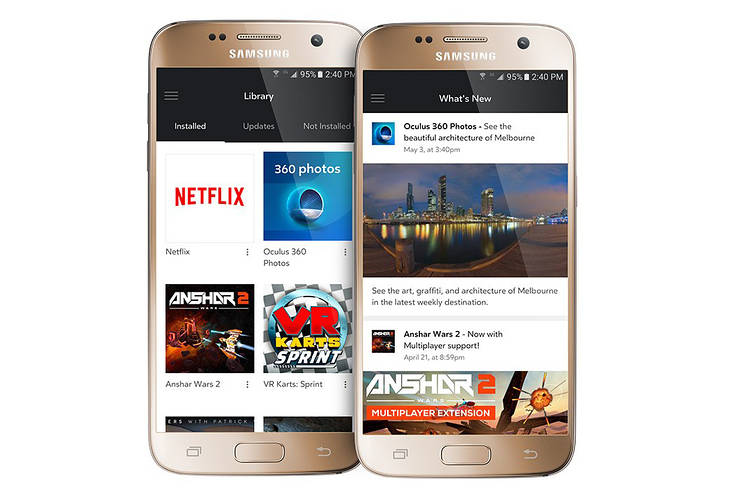 ENLARGE
Facebook's 360-photo support will extend Samsung's Gear VR headsets, which run Oculus apps, such as Oculus 360 Photos. PHOTO: FACEBOOK INC.
While we haven’t seen Facebook’s panorama bending in action, the promise is great. The biggest reason our panoramic photos stay buried in our phone’s photo galleries is because they look like long skinny strips in text messages and on Facebook, and are chopped down to squares by Instagram.
Of course, we don’t yet know if Facebook’s system for turning panoramas into 360-photos will be any better to look at. But the bar isn’t very high.
Facebook isn’t doing all this just to give you something to do with your panoramas. It is backing 360-degree photography because it needs content for Oculus. The VR market is nascent, but Oculus is an early leader, with the Samsung Gear VR headset, now in the hands of more than 1 million Samsung phone owners, and its more ambitious, if delayed,Oculus Rift system for PCs.
Last September, Facebook began supporting 360-degree video in its apps and website. But so far, these all-round views are few and far between on the social network, mostly because 360-degree video is hard to capture and edit.
When it comes to making 360-degree photos to share on Facebook, you can do that with a dedicated 360-degree camera, like the $350 Ricoh Theta S. Or, if you don’t want to spend that kind money, Facebook will support 360-degree photos created in apps such as Google Street View on both iOS and Android, Google Camera for Android, and the built-in camera app found on Samsung’s latest Galaxy phones. Each of these apps direct you to shoot about a dozen individual photos in specific directions. They then digitally stitch those images into a sphere that is viewable in 360 degrees.
Before you go out and spend any money, however, it is worth noting that it isn’t yet clear if Facebook will support all of the 360-degree photos you can make with various cameras and apps. The company didn’t immediately respond to a request for specifics.
Write to Nathan Olivarez-Giles at Nathan.Olivarez-giles@wsj.com
Posted by Unknown at 23:28